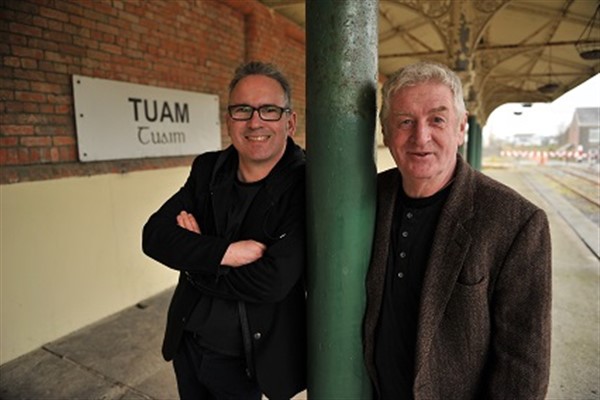 
Following a sold out Kilconly gig last June, The Saw Doctors will play a second concert at
The Venue, Kilconly on Saturday 15th October, prior to travelling to the UK for ‘comeback’
shows in London at Brixton Academy, Manchester at the o2 Apollo & Glasgow Barrowland
in November and December.

The Saw Doctors line up includes founding members Davy Carton on vocals and Leo Moran
on guitar, along with former Waterboy Anthony Thistlethwaite on saxophone, Will Merrigan on
bass guitar, Headford native Kieran Duddy on keyboards and Rickie O’Neill on Drums.

In August The Saw Doctors travelled to Hampshire in England to headline the Wickham Music
Festival, playing to over 7,000 people in a sold out marquee tent.

The Saw Doctors started out playing in pubs in Tuam and were invited to tour with Mike Scott of
The Waterboys, spending six weeks as support on the 1989 'Fisherman’s Blues’ tour of the UK.

The Saw Doctors gained national prominence when their second single ‘I Useta Lover’ spent
nine weeks at Number 1 in the charts and went on to become Ireland’s best-selling single of all
time, outselling U2, Van Morrison and Sinéad O’Connor.

Last year The Saw Doctors scored a surprise chart success when the vinyl release of the band’s
debut  album “If This Is Rock And Roll, I Want My Old Job Back’ landed at No. 3 in the Irish charts,
over thirty years after the album, which includes ’N17’ and ‘Red Cortina’, was first released by
Solid Records, going straight to No.1 in May 1991.

Over the years,The Saw Doctors have built up a reputation as an unmissable live band with sold
out tours & many festival appearances, including Glastonbury and the London Fleadh. Famed for
their unrelenting energy, a Saw Doctors live show is still performed with as much passion as their
legendary small-town gigs 30 years ago in Tuam and Galway.

“Born into a repressed, catholic, conservative, small-town, agrarian, angst-ridden and showband
infested society, The Saw Doctors are trying to preserve the positive elements of our Irish background
and marry them to sounds which have culturally invaded our milieu through TV, radio, social media,
45’s, fast food restaurants, 24-hour petrol stations and electric blankets".

“If The Saw Doctors could bottle the sort of bonhomie that can make an entire concert hall feel better,
they would have the medicine show to end them all”.    Paul Sexton, The Times